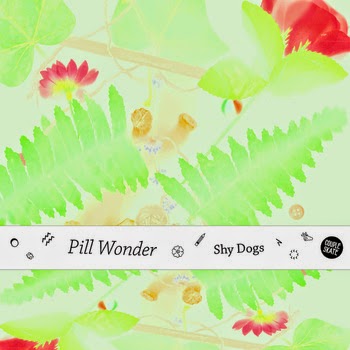 After listening to the new album by Nate Henricks and looking over my old reviews on his earlier albums I was reminded of Pill Wonder, another electronic bedroom pop musician I highly admired. Pill Wonder's debut album Jungle/Surf came out back in 2010 and I listened to that motherfucker day and night for months, and it held place in my personal rotation for years after. Now after a four year break has this Seattle-based musician released a new album on Couple Skate Records. As you might imagine the style has altered somewhat with the intervening period, and the album is noticeably less chaotic, noisy and psychedelic than Jungle/Surf. In fact is easily noticeable that he's become influenced by 80's music from both Japan and those Westerners mimicking them. Reading about the release on the label's website, "Haruomi Hosono’s Yen Records crowd in a creative exchange with Mark Isham’s seminal 80’s works" are cited a major influences for this new direction. Therefore, one familiar with Pill Wonder already might not recognize Shy Dogs as by the same artist if not told so beforehand, but this isn't to say he's lost anything as much as tried something new and produced a damned sweet set of songs. It is just a wild conjecture on my part, but if I recall this fella and I are about the same age and I am curious if this is him calming down and attempting something more refined, even if that is in the realm of composing albums on his computer.

To be had here:
Pill Wonder - Shy Dogs
Posted by Antarktikos at 12:00 PM