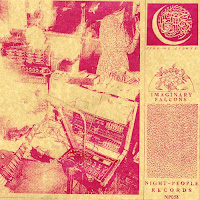 Recently Detroit has wronged me. Some of the city's more nefarious characters roughed up my deplorable automobile. As you might be able to surmise, I was a bit taken aback and dispirited from the circumstance. Seeking solace in music, I have developed a minor obsession with Peaking Light's spectacular album, Imaginary Falcons. I'm not sure about you, but I really find something eerie, depressing, or mournful to be excellent at fortifying my mood when in a wretched state. While Imaginary Falcons is not depressing, it was abundance of eerie sounds and otherworldly effects. After realizing I had heard it a several times in one day, I found myself wondering why I hadn't gotten into it sooner; vexing my stupidity and lackadaisical ways. Should've remained closer to home with "Wedding Song" creating a park in my mind than trying to visit the new greenway in the city. Anyhow, Peaking Lights is sensational, as it might be expected with members of Numbers at the helm. So if you're hankering for psychedelic, lo-fi noise-pop this cannot be missed, that is unless you're even dumber than me.

This fella started catching a deal of positive press in the Detroit area weeklies a bit back. To give credit to gumption where it is due, I was not the one that decided to download it and give it a spin, but rather my older brother is to thank for this. Mayer Hawthorne not like any of the other album I've posted. Therefore, I haven't much to compare it to in my usual frame of reference. First thing to avoid though is judging the album by Hawthorne's appearance on the album's art. He might look like he's making something stereotypical like sweet sounding indie pop. While the music is sweet, it is certainly not like the usual pop. The best way I can think of to describe it is a modern version of Blue-Eyed Soul of years back. Most certainly R&B, but so incredibly enjoyable I can't hardly believe there isn't a special genre just for A Strange Arrangement. His soul sound shows he was exposed to much of the same Motown soul stars that most Michigan kids grew up with on the radio such as Isaac Hayes, Curtis Mayfield and Smokey Robinson. I am unsure if this guy is getting the same attention elsewhere, it could just be pride of a local boy that garnered him some friendly press, but it wasn't unjustified. After all, Madlib saw fit to place him on his Stones Throw label. I suggest taking a good listen. I apologize for the low bit rate, my brother doesn't understand...

Not to be had here: jig is up, stones throw found out fast about this one

Posted by Antarktikos at 9:07 AM No comments: