マクロスMACROSS 82-99 - A Million Miles Away

The new Macross album is fantastic, it's as simple as that. I imagine some readers of this blog have been following macross for a while now, so you already know what to expect from macross--he does not disappoint. The quality is on point as per usual, samples are phenomenally arranged and manipulated, and the mood Macross evokes with his music brings to mind the renderings of 90s anime--cities full of neon lights, people dancing and sweating, futurist motorcycle gangs cruising through a techno-dystopia, that oh so fashionable dystopian chic pervasive to much cyberpunk anime. These phenomena culminate into a nostalgic fever pitch which interpellates and fetishizes japanese culture through an unabashedly glossy musical lens. 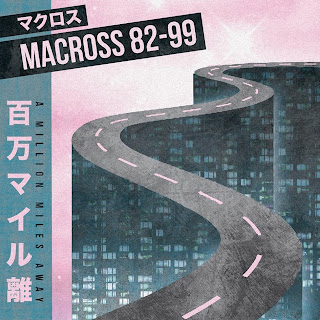 Clearly this hauntological approach interpellates the musical listener as a nostalgic subject, and thus solicits more perverse and extreme nostalgic longings for cultures and time periods that hold no memory within the subject. But instead of condemning the current state of music for being 'stuck in the past', 'musical pastiche' or 'manufacturing nostalgia'; suspension of time (atemporality) should be seen as a positive creative force of the present. If we conceptualize time as a linear sequence of events (ie the 60s, 70s, 80s, 90s, 00s, etc etc etc.) we allow ourselves to dissect the present into a 'present past' and a 'present future' that both meet at a 'present now' which is more or less the quilting point between the two. We need to expand our 'present now' beyond this particular moment--allow it to be seen as still alive and at work within some sort of "zeitgeist." There have been no revivals, there is no surf or garage or synth pop revival, just mining the musical terrain and language which is in a constant state of becoming, something that doesn't end every 10 years. Using musical genres (punk being but one example) as a form of human identity facilities the discourse of subjectivity that plauges and transforms creativity as discreet scenes that have a time and place, a memory which is the private possession of those who "were there." These are some things to ponder and maybe flesh out. Either way, the new Macross achieves something far greater than contemplating about it, it is music of the now age, it is pop, it will make you want to dance, it will make you want to watch cartoons, it will allow you to "be there." This post suffers from no actual musical criticism//this dude likes 7th chords//better


KEATS//COLLECTIVE Vol. 5 released today and free as of right now
Posted by Major Video at 1:34 PM