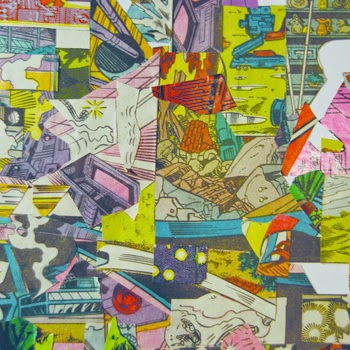 Nate Henricks is back with a new album for us all to bask in. I've written this guy up a couple of time previously, with the release of 2011's Horse Carrot//Lemonade Guarantee and 2012's NTH MERIDIAN. I apologize to everyone for missing his 2013 album HORSERADISH, which keeps up the amazing string of albums from this experimental bedroom pop musician. The music has elements of some many things that I enjoy it is hard to know where to begin. As usual it reminds me of Elephant 6 psych pop, especially the wilder songs of Olivia Tremor Control and Major Organ and the Adding Machine. I really don't want to reduce this fella to a reference though, he is the motehrfucking bee's knees with his lo-fi DIY recordings. The songs are funny, charming and addictive once heard. I cannot stop listening to "Sometimes I Die" and "Stuck Inside the Frame" as they are pretty much prefect expressions of what I want bedroom pop to sound like.

To be had here:
Nate Henricks - NEON FOR NO ONE
Posted by Antarktikos at 12:17 PM