I adore this album. Marshmallow Coast is another one of the many Elephant 6 collective groups I spout off about frequently. Ride The Lightning is my favorite of their releases by far. Sadly I uploaded this a bit ago but I haven't gotten much time to use the internet with the bullshit summertime hours I've been getting. What the fuck do people buy pre-made kabobs for anyway? Douchebag rich people... Back to the music! Marshmallow Coast is light, sweet and poppy fluff tunes. Sometimes that is exactly what one is hankering for though. The first track is "Classifieds" a fine example of what the band cranks out regularly, and if you like it you'll likely like the whole album and their others as well.
To be had here:
Ride The Lightning (192 kbps)
Posted by Antarktikos at 12:59 PM 2 comments:

Bablicon is far too obscure band for the talent it could tout. In a loose fashion Bablicon can also be included in the greater Elephant 6 family, if your criteria is basically that members of this played in Elephant 6 bands previously. Griffin Rodriguez aka Blue Hawaii who is member of Icy Demons, David McDonnell aka The Dimisher, and perhaps most famous is Jeremy Barnes aka Marta Tennae now leading A Hawk and A Hacksaw as well as formerly working with The Minders. Musically it Bablicon is quite a stretch from the sugary twee pop that Elephant 6 is associated with, but nothing beyond what these seasoned gentlemen were able to do skillfully. Definitely experimental, when I listen I find myself wondering why the term "free jazz" can't be used for this instead of the bullshit that is currently referring to. All of the trio can play a number of instruments and they accordingly make use of this asset. I'd say it is progressive jazzy post-rock improv stuff if that makes any sense. Some call it avant-pop, but I have never even heard of that damned shit.
To be had here: all @ 128 kbps

Finally the internet is back at my command. So empowering I'm dizzy just typing this. On to the musics then. Although I'm certain this album did its rounds across the internet, I am compelled to share it once again for all those that might have been so unfortunately to as had missed it. Recently I've been unable to help myself upon getting in the car to automatically begin listening Curtains. The opening track "Go Lucky" works wonders for calming my normally elevated tension that comes with operating an automobile. In praise of this track I by no means want to imply it is all there's to this collection of songs, they're all fantastic. The mellow build up and the lovely higher pitched singing make for a very relaxing listen. Of course it is worth noting that the group is made up of members or former members of some excellent bands such as Deerhoof, Natural Dreamers, Open City, and St. Joseph and the Abandoned Food. Additionally with the release of Calamity they moved to the laudable album Asthmatic Kitty. 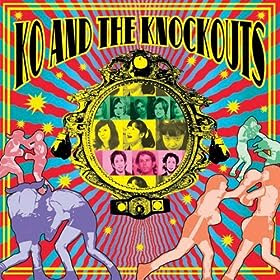 Ko & The Knockouts were only for the many in the turn of the century garage rock acts to sprout up in Detroit. There are several decent acts that are somewhat like Ko & The Knockouts, nonetheless, I find each has their own particularities that makes them interesting. Perhaps my favorite feature of this band is the singing of Ko Shih, from which the name of the group is derived. The members like many garage explosion were partaking in more than one band, the lead singer of the Sights, Eddie Baranek, playing the guitar in this one. Ultimately this would be the undoing of the group though as Ko took a place with Mick Collin's Dirtbombs which lead to the dissolution of the Ko & the Knockouts. Basically, if you like The Gories I shared a bit ago or the Compulsive Gamblers long before that, you might think about getting this. All that said, I understand it is no epic release, but very pleasing for me.

P.S. I've again lost my regular connection to the internet, so I am doing my fucking best. Moreover, I'm in a very strange state of mind because I bought a Doris Day cassette in Northampton, MA and it has been warping my thoughts via Walkman ever since.
To be had here:
Ko & The Knockouts - Ko & The Knockouts [160 kbps]
Posted by Antarktikos at 1:35 PM 1 comment: