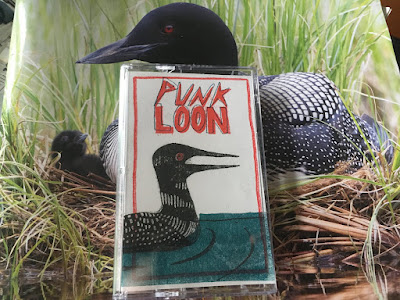 Throughout the 1990's a Wisconsin-based record label called NorthSound released tons of CDs and cassettes with focus on the unlikely pairing of nature sounds with calming musical genres such as classical, new age, and jazz. This niche genre would eschew the normal venues where music was sold, instead dominating the rotating kiosk market commonly found in businesses like bookstores, gift shops, and even mom-and-pop hardware stores. The label put forth now-forgotten records with very literal titles such as "Pan Flutes By The Ocean", "Symphony For Whales", and "New Age Wolf".

Several artists would prove prolific for this label, including one Robert W. Baldwin who released an impressive 40 titles for NorthSound and it's sister label, Nature Quest. Over the course of a decade, his contributions included the aforementioned "New Age Wolf", but also releases melding various musical stylings with calls of the iconic duck of the northern US and Canada: the common loon. "Classical Loon", "New Age Loon", and perhaps his most popular release, "Jazz Loon", all made their way to the marketplace (remarkably, all in 1992) with the NorthSound imprint.

In 2018, 4 musicians out of Portland, Oregon set out to add their own unique twist to the releases of Robert Baldwin, with a release called Punk Loon. In much the same way, the music is simply field recordings of a loon played over punk rock. The band features several members of Portland's art and music scene who are more recognized for their other bands such as Landlines, The Woolen Men, Lithics, and Nucular Aminals.

Let's face it: animal/nature sounds over music is pretty silly and reserved for listening by folks who'd rather marvel at the strangeness over enjoy it for it's musical quality. But this release challenges that at least for me, because the music is what I like. Not to shit on the loon, I love the sound of the loon. Punk Loon, whether they realize it or not, may have started the reemergence of the nature+music genre with this release. I, for one, look forward to future potential releases such as "Hardcore Gorilla", "Goth Chicken" or "Garage Crickets".

The possibilities are endless.

Posted by Amazing Larry at 11:43 AM No comments: