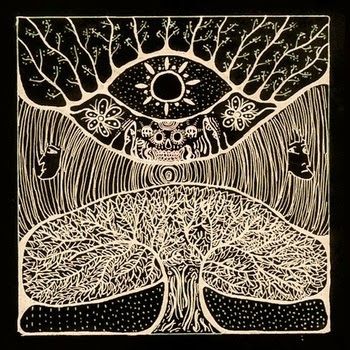 This Japanese band is one of my favorite groups to emerge this year. Within a few months, they have put out two awesome cassette tapes (this review is about their first self-titled tape recently released by Burger Records), have an LP about to drop on Beyond Beyond is Beyond, triumphed at the Austin Psych Fest, and toured the shit out of the US. I am not sure if these guys were active in years prior, but that is a pretty good year for even the most hardened veteran bands.

Yes, Acid Mothers Temple and Ghost do come to mind, and not just because both bands are Japanese. Clearly, Kikagaku Moyo is well schooled in the long-form psychedelic ragas and jams of the late 60s. Sitars and waves of reverb accompany more than a single track as the band builds to explosive highs before pulling you right down into a meditative slumber. This is music with a purpose, and that is to expand one's mind while allowing it to stomp along with wailing riffs. Just listen to the track "Tree Smoke" get an idea of the bliss I have been in since grabbing a copy of this cassette. Unlike their brethren in AMT, these kids know how to keep thing focused, even when letting their tunes meander and discover themselves.

Kikagaku Moyo is finishing up their tour here in the states, and I am sorry that I missed them when they dropped into the Bay Area. I won't make that mistake next time they are state-side, nor will I miss a single release.