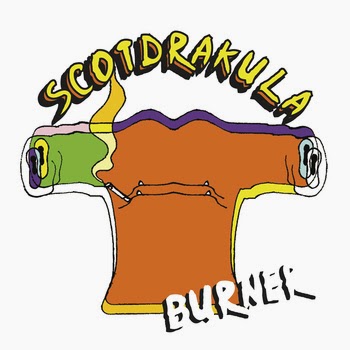 Not to threaten the dominance of our own Elvis Dracula and this most amazing Drunken Draculas, I thought I would risk his wrath by touting the Australian vampire-named lo-fi rock act ScotDrakula. Firstly, some time ago ScotDrakula sent in an album, the debut release poetically entitled CRACKSTRENGTH. It is a wickedly good album that mixes in country and soul in unbelievable ways to the garage punk core, and my write-up of it didn't do it justice as I think that was a period in which most of my music listening was done in a busted-ass 1995 Dodge Stratus with half-blown out speakers and engine that drowned out all the mids. Thankfully I have real headphones again and that car not disgracefully cruising around anywhere except car heaven. BURNER was only released a year after the debut and they didn't tell me, for which I cannot blame them. However, I was listening to various albums on my commute to and from work and CRACKSTRENGTH came around and I had to find out if they made more music immediately. Anyhow, what I found was this fucking awesome album of fuzzed out garage rock that was a playfully soulful tone and full-realized blending of punk and pop elements into an album I cannot stop listening to. It sounds so damned full, just busting at the seems with music, and I admire that to no end. Finally, this isn't their latest release as they've put out a single with a b-side called Break Me Up in 2013 which gives me hope for more songs from them this year possibly.

To be had here:
ScotDrakula - BURNER
Posted by Antarktikos at 10:36 PM