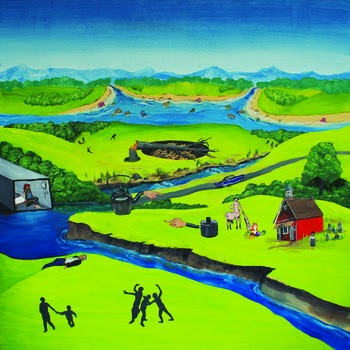 Sprïng might have an umlaut but don't let them fool you into believing they're a Nordic metal band, though I would not be surprised if they've listened to some of heavy rock from Scandinavia. In reality they're from Vancouver and make psychedelic rock that incorporates some elements of both hard and math rock in their guitar freak outs and intermittent use of choppy, angular playing. However, naturally for a psychedelic band they've got influence from 60s groups to numerous to name. This isn't to say they'll don't have melodic and dreamy tracks as well, but rather that they vacillate among a range of tones while very skillfully maintaining a theme throughout the album, which is a sort of surrealistic yet happy. The music is blends their various instruments, as they're all multi-instrumentalist, into a just-chaotic-enough state. Finally, while all the members are experienced musicians that've played in several different groups, a couple of them were in SSRIs, which I hadn't heard of previously but are also quite awesome (and on bandcamp still).

To be had here:
Sprïng - Celebrations
Posted by Antarktikos at 3:39 PM