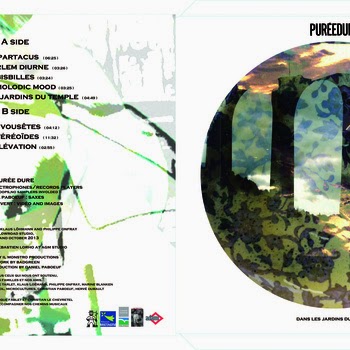 Woke up to find this as my only new email the other day and I decided that instead of my usual routine of hearing depressing news first thing from NPR or the BBC as I get dressed I'd play whatever this French-looking thing is. I'm glad I did so as I was pretty immediately enjoying the sound of this jazzy electronic music. The horn playing is heavy on the top with a really catchy mixture of percussion and electronically produced effects backing it up. I won't call it smooth, because it isn't that snooze-fest bullshit sort of jazz, however it is subtly crafted and hypnotic with its repetition. It isn't officially released until the 24th of April, but it can be streamed now and bought digitally. I hope it has the alluring affect on you that its had on me.


To be had here:
Purée Dure - Dans les jardins du temple
Posted by Antarktikos at 3:08 PM