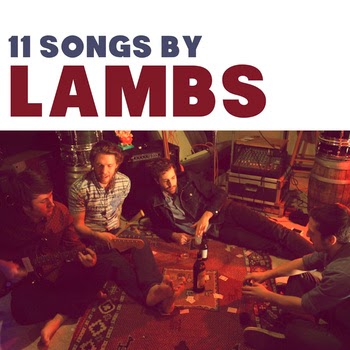 From time to time I make an egregious oversight in when sorting through the many submissions we receive, including being completely spaced as far as SRM goes at all. I believe one of my absentee periods coincided with LAMBS sending us something. Straight up, pilgrims, I found a year or more old email, and then I felt bad about it. On the plus side I looked into what LAMBS has been up to since then, and it seems they've got a full-length that came out in the first half of 2014 and it is most certainly worth talking up.

LAMBS are from Cambridge, Ontario which is a city I've passed through several times in my life, as it lies between Detroit and Toronto and further on Rochester, NY where my little brother attends graduate school (shout out: it is his birthday tomorrow, motherfuckers). Anyway, while I fondly recall the nice girl I had to gently explain to I didn't want cream in my goddamn coffee in Crambridge's Tim Horton's, more exciting than a particular experience of mine there is that it's produced such a fine band as LAMBS. They're indie pop, sometimes touching up on pysch-pop, but these almost seem like terms a bit late for what their sound has captured. Namely, these dudes seem to have an affection for Buddy Holly and his sweetly charming, twangy early rock and roll vibe. The amazing song "Summer Fling" drives this home very eloquently. The other songs are more subtle in the Holly-esque mimicry, blending many early rock, psychedelic and indie pop sounds. They're soft, pleasant but far from cloying and incredibly well composed in these 11 Songs.

Oh, and what they had submitted was there 2013 EP entitled Blisters. For the record it's fucking awesome and should have been featured on SRM for sure. So if you like 11 Songs, look into it sooner rather than later.