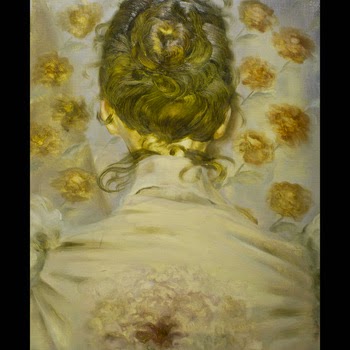 I've long held a theory that my musical tastes are cyclical and that I loop back around to things I recall ever so fondly from months or years ago start digging around in a genre, scene or even a particular artist's discography. While, I have been remembering my affinity for Finnish experimental music. It can be hard to describe with a mess of adjectives, but what's for certain is that it's unique to Finland, rather like the Finnish language itself. As these returning obsessions burn rather strong I will doubtlessly share several of my favorites that have new material out, in fact it was already begun my Finnish campaign with mentioned Joose Keskitalo (a member of Paavoharju that has wonderful solo albums) in the Ellis Swan post and sharing Lasten Hautausmaa (a labelmate also on Svart Records) in the last Grab Bag. As such, each were preludes to the album I share today, Paavoharju's third album and the first full-length release since 2008's Laulu Laakson Kukista, the even longer-titled and mind-blogging to pronounce, Joko sinä tulet tänne alas tai minä nousen sinne.

For those that are familiar with the prior output of both Paavoharju and Joose Keskitalo this will have recognizable traits, but it is overlain with one of the more drastic of changes in style I can recall a band undertaking. Essentially, they kept their ethereal, psychedelic folk instrumentation, even retaining the Finnish chanting that made the previous albums so mesmerizing, and laid hip-hop on top. The hip-hop is in Finnish, which is something I've never experienced and can't compare to anything I've ever heard before. It isn't everywhere, they've classily spread it throughout the album and not made it the sole focus, though you will most certainly notice it. At first I was bewildered, but as I kept listening I found myself digging what Paavoharju was up to. It's a ballsy move, and it is rather well executed. It is undeniably a fine example of the Finnish avant-garde to which I am so deeply endeared, and different enough that it has achieved what good avant-garde should, making the listener re-assess their preferences and expand their palate.