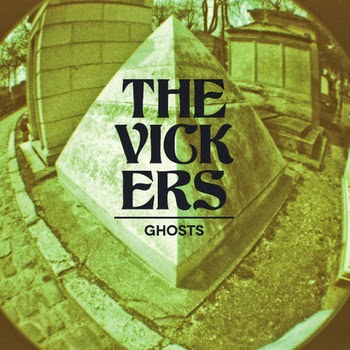 A few days rest does a wonderful thing for the ears. So much music so fast there for a minute. Always say I'm gonna cut back but it doesn't seem to work out that way too often. There's the knowledge that I've got a submitted album from some dudes from Italy or wherever chilling in the inbox that makes me come back sooner than I imagined to writing shit up with rapidity.

The Vickers are indeed from Italy, the city of Firenze to be exact. Yet you'd be forgivable if you thought they were a British band hearing them without any other information. This is no accident, as they seem to have plotted an act that pulls directly from the British Invasion and later psychedelic music that was popular on the island and held international attention in the 1960s. The Vickers is a name that could fall in with the likes of the Kinks, the Troggs, the Searchers and so on very neatly. In light of this the title of this album, Ghosts, takes on an meaning it otherwise lacked. The Vickers are a reincarnated form of the iconic style that we all grew up hearing on the radio and from our folks records collections, at least if we were lucky. To this end they're an endearing band, if not the most cutting edge. Of course, how or why would you want to be cutting edge if what you'd like to play is hazy, 60s-esque psychedelia? Certainly why should you if you're as good at it as the Vickers are. I recommend it to those that enjoy that British form of the psychedelic revolution, so long as you don't fret too much over it coming fifty years later and from Italy. Or as Craig would say. "sounding like a band that I'd rather hear." Expand your mind, even if in a direct that you fell you know, why don't you?

To be had here:
The Vickers - Ghosts
Posted by Antarktikos at 7:59 PM