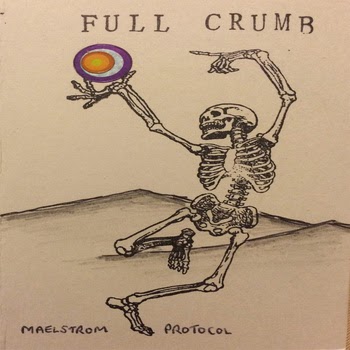 Full Crumb are from the United Kingdom, not sure where exactly, as I wasn't told. Yet through an unknown series of events is being issued on cassette and digitally by the Athens, GA-based label Fall Break Records. However, after listening to Full Crumb's output, I can understand why they'd be eager to release it.

Maelstrom Protocol is a particularly tricky albums to describe. It really is the sort of thing that is best experienced without too much preface and pondered about by the listener for days afterwards during the likely sessions of re-listening. Truly a whole range of genres are applicable to the Maelstrom Protocol, being in near equal measure krautrock, British new wave, psychedelic, experimental pop and shitgaze. Perhaps the only caught-all term that works is art rock, but as we all know that doesn't tell you much about the songs really sounds. Let's put it this way, there's something of Orange Juice or the Fire Engines sort of Scottish late-80s thing, strange audio clips serving as intros, dreamy pop numbers, and an overall feeling perverted reverence throughout. Go on, have a listen.

To be had here:
Full Crumb - Maelstrom Protocol
Posted by Antarktikos at 9:32 PM