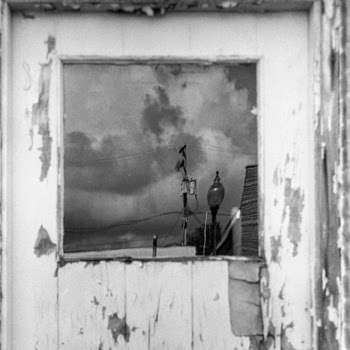 The dark folk songs of Ellis Swan have a way of imposing a reflective melancholy on the listener. This isn't a bad thing in anyway, in fact it is the same thing that a fine work of literature can produce for its readers. It is an unfocused, aimless sort of feeling that isn't quite longing, sadness or regret. I find it to be a healthy sort of pensive mood that helps prepare me for whatever shit, good or bad, might happen next. Now, I'm not trying to impose what I felt hearing I'll Be Around as Ellis Swan's artistic vision, as I am surely biased. However, that it is slow, gloomy folk music is a rather unavoidable conclusion, and that it's among the finest I've heard in years is my opinion.

The songs are sparse, the lyrics are sung quietly, and the guitar and organ are soft and subtle. The effect is a very ethereal album in which oneself can be lost. The tone and style of I'll Be Around may be best compared to other folk acts like Timber Timbre, C. M. Slenko or Joose Keskitalo (that last one is thrown in for fans of Finnish avant-garde). Be sure to check out what the Modern Folk had to say about this album as well, for he got to writing it up before I did and I tried not to just crib from his fine write-up.

To be had here:
Ellis Swan - I'll Be Around
Posted by Antarktikos at 2:32 PM