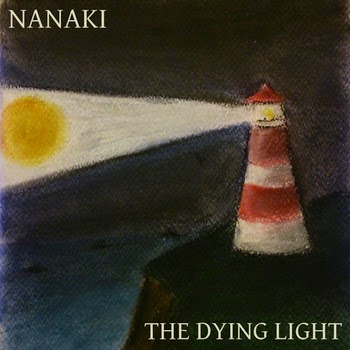 Nanaki is the moniker of a Manx musician that makes experimental instrumental. In fact he has been making it for some time now, and this is his first full-length album since 2003. He hasn't been silent in the meantime, there was an EP he released early last year called Afterlight. As the title of this new album poetically implies, The Dying Light is a follow-up to that EP and expands the guitar-heavy post-rock to an epic scale.

Much of the music Nanaki makes on this new album is gets near post-metal in the degree of heavy guitar playing, but I'd place it nearer bands like Lebanon, Maserati and Kinski which I compared the Swiss band, Viaticum, to as well. During seven minute plus songs "Unholier Than Thou," Nanaki seems to be at the pinnacle of his guitar-wielding powers. However, the style of the album doesn't stay to the droning post-rock guitar throughout. Roughly halfway it gets more experimental and some of the tracks, such as "Perpetual Commotion" begin to veer away from the guitar and rely more on the piano in an elegant mid-album tonal shift. Thereafter the songs become more cinematic, the piano creating the effect of many unseen tales having taken place with these enthralling compositions in the background. While I'm not familiar with his music prior to his elongated period of hiatus, I can confidently say he is growing in composition skills since Afterlight already. The longer, more dramatic songs really allow him to paint a sonic landscape more thoroughly and rewardingly.

To be had here:
Nanaki - The Dying Light
Posted by Antarktikos at 6:53 PM