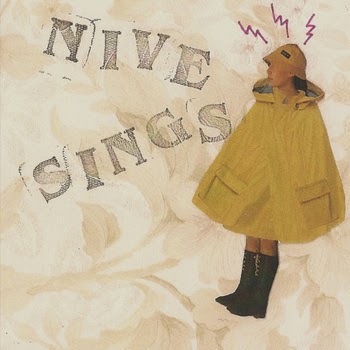 Found this album in a backwards fashion. Well, sort of, ever since we've been geographic-based 'Scenes of a City' posts, it has become a bit of a habit of mine to throw locations into bandcamp and see what pops out. Even if it is somewhere remote and/or culturally removed from the majority of bandcamp users. Anyhow, as you may have put together I was reading about Greenland (lolling around with a cold, I seem to get little done other than read wikipedia). In particular I was learning about the only locality that passes as for urban in the arctic country, it's capital, Nuuk. As you might imagine a city of some seventeen thousand doesn't have all that much going on musical, but then again, it is the center of Greenlandic culture. So, I poked around and found something to share.

Nive Neilsen is the Greenlandic singer that this so aptly titled refers to. However, without the fact that she's from Greenland being pointed it out at such length by yours truly already, it would be easy to never even consider this coming from the United States or Canada. The music is rooted in American folk, though very much through the lens of modern indie pop, maybe the best comparison I can summon is Benni Hemm Hemm. Like most of the albums I have been praising most highly lately, the style isn't fixed throughout. Sure, there are folksy indie pop tunes that do an wonderful job as showing of Neilsen's elegant singing talent like "Good for You" and "My Coffee Boy." Just these would have earned enough of my interest for me to post Nive Sings! And yet there's more to this release. For an album that's title implies the showcasing of a singer, the instrumentation is damned remarkable. The roster of musicians that worked as the Deer Children is lengthy and they played all sorts of things from weird folk favorites like the saw and banjo to the ever-adorable ukulele and kazoo. There's even a song called "Autoharps!" You can guess what may happen in that one. So while Nive Sings! was put out five years ago, yet this is the first I've heard of her. Once I looked around it seems she's still active, including getting some attention from Daytrotter. I'll finish by saying I think she's been overlooked and certainly merits attention.

To be had here:
Nive Nielsen & The Deer Children - Nive Sings!
Posted by Antarktikos at 9:26 PM