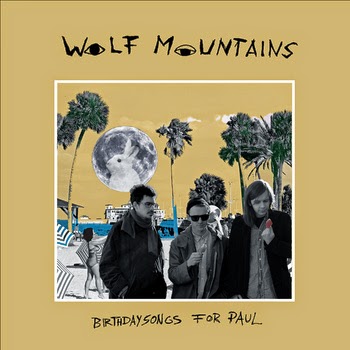 A garage punk album has been overdue on the posts lately. It is always overdue in my day-to-day. I cannot ever get enough if it, though as you can very well see from what I've been posting recently I often stray for considerable periods of time nonetheless. Yet that time has come that I've hit a wall, and without seeing any garage floating around in the submissions (perhaps I didn't dig enough, but I am fundamentally lazy the inbox), I looked for something on my own. It took very little time to find Wold Mountain, who aren't to be confused with any of the other panalopy of bands that have "wolf" in this name, nor written off for the same reason.

Wolf Mountain are from Stuttgart, Germany and play a very lo-fidelity garage punk. The songs do get quite heavy and sleazy sounding, and overall the band does fall towards the trashy punk style. However, they don't just jump into it (not that there's anything wrong with that in punk rock). What I'm trying to say is they make a real show of it. It isn't all howling and fuzz though these have a prominent place. The songs are pretty complex and artsy as far as garage punk goes. Moreover, while there are likely many more contemporary comparisons to make I am gonna go grandiose and say they remind me of Television. This is about the highest praise I can give a band. Birthday Songs For Paul does many of the things I cherish in Television's albums, they're real and deep, songful compositions. In the sort period one gets to dwell within them they do more than satisfy the desire for noise done up with an overlay of melody. These Germans are musicians.

To be had here:
Wolf Mountains - Birthday Songs For Paul
Posted by Antarktikos at 9:48 PM