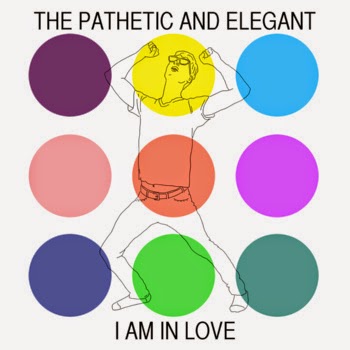 My legs are sore and my brain is sleepy. Too much hauling, and the big furniture of this move is coming tomorrow still. My mind is weary as my boss as decided the driving force in his life is to converting me into a teetotaler, which frankly sounds like an awful plan. So I get to my uniquely unpleasant position of having an eccentric old bookseller chasing me around hollering at me and making up schemes for me to achieve utter temperance. How do I cope with it? Drink a beer and listen to an album, because I am not a mad Lithuanian like my boss.

I Am In Love is an album by 21 year old from Baltimore, Maryland that's chosen the poetically delightful name of the Pathetic and Elegant. It was written while he was in Osaka, Japan, which seems like irrelevant information until you hear the lyrics that make references to being away from home and around Japanese girls. Overall it is a lyrically heavy album, but in the same way that a Car Seat Headrest song can be, in a seamless blending of lot-fi bedroom pop with awkward lines sung with sincerity. In fact it reminded me of several strange indie pop musicians like Car Seat Headrest, Nate Henricks, Tim Cohen and James Ausfahrt. No so much as they musical compositions are alike, rather they seem to bear similarities in conception and tone. What I mean is that despite the reminiscences that it may provoke for me, it sounds incredibly unique and compelling. The songs themselves are very well produced and will bet re-listening like good indie/bedroom pop should. I especially love the tracks "Come On, Baby" "Call Me Weak" and "I've Got The Vibes" as excellent displays of successfully quirky songcraft. Also, if you look at the bottom of the bandcamp page you'll notice this: "Vocals for this record were recorded in various karaoke bars through out Japan." Now that a fucking way to be, pilgrims, bringing your own songs to karaoke.

Finally, I Am In Love was put out by Spellabee Space, a neat Baltimore indie label, podcasting hub and artistic promotion project that seems to be getting going, but looks quite promising. If their tastes are to be trusted based on their working with the Pathetic and Elegant is any indication it should be a source of more quality media.

To be had here:
The Pathetic and Elegant - I Am In Love
Posted by Antarktikos at 10:06 PM