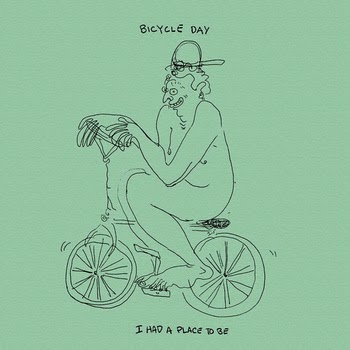 Ever feel like you volunteered yourself for too much work to get done reasonably quickly? I have done that at my job, as I had decided that several decades worth of unsaleable computer books need to be dumped out of the store so I can make way for good stock. Easier said than done, I've packed and hauled them all day today and I am not even half done. My day is aching and I've only myself to blame but at least there are remedies to be had. And sitting down to a good lo-fi album is always one of them for me. That and good measure of beer my boss discourages me from buying with I read novels I bought from his store.

A debut album by the Oakland, California band, Bicycle Day. They play a very distorted and fuzzy garage rock. They nailed those vocals, by which I mean I can't understand the vocals whatsoever. Then there's the music that's fucking awesome. Basically everything is washed out but the songs still have a very west coast surf undertone. It is like sunshine dragged through a sea of mud and making awesome sounds the whole way. The songs on I Had A Place To Be almost seem catered to me, as I have been listening to a bunch of Yelephants, King Cayman and King Khan & BBQ Show lately just because I find that the most naturally productive sort of music for me to hear. Like I get shit done with that sort of lo-fi pulsing in my eardrums. I found I Had A Place To Be to be a most excellent addition to this rotation and a superb effort for a debut. Left me wanting to hear more songs immediately. Luckily there was their Vandals EP to hear as well that bears the same characteristics that I adored in the full-length.

You can get in now on their bandcamp page but I was told they are soon gonna be released via Lolipop Records too, maybe even so by this time.