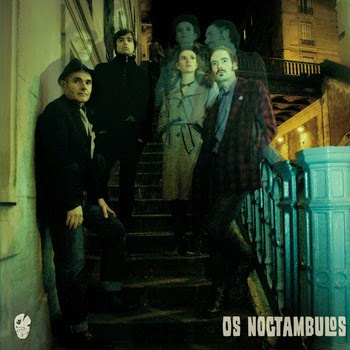 The Anglo-French psychedelic garage rock band Os Noctàmbulos are a band that I believe Amazing Larry had put in for our podcast before, and I think I wrote up a band featuring a member of this group previously, called 39th & The Nortons. Beyond being a band that is British and French musicians with a Portuguese looking name, the group sounds like they're ardent listeners of early garage rock, surf and psychedelia of the 60s. Bearing the unmistakable influence bluesy garage that period such as the Animals, the Monks and the Sonics along with some tracks showing an affinity toward the reverberated style of Dick Dale. Corsica Garden is a fine distillation of the era's sound, almost eerie how much the songs sound like their out of time having just come out this year.

I not only liked the album but I am prepared to defend the fact that it sounds so spot on like 60s groups. Of course that would be impossible to have an absolutely unique style, as all music, and literature and visual art for that matter, is derivative. Yet it is fair to say Os Noctàmbulos aren't derivative as much as purposefully retrospective. Garage rock hasn't been stagnate, for every now and then something like punk comes along and infuses itself into everything, and not the least into garage rock, but it doesn't shift completely otherwise it would cease to be garage rock at all. That said, why can't a modern band play like a band from the 1960s, but perhaps better or more interestingly while leaving out the punk and shoegaze that came later. Especially considering that the actual music from the period was so studio-driven with many hits being written by songwriters from bands that failed to make it big, yet got to see other bands ride to fame with them (I am thinking of the Buckinghams here, who were from Chicago and took that name to seem British and whose hit was written by another Chicago band, yet they're still great).

So some dudes from the United Kingdom and France got together and wrote something that reflects a particular time and place in musical history, but still did a fucking amazing job at doing it and deserve credit for such masterful songwriting. I wholeheartedly enjoyed Os Noctàmbulos and would recommend the album to anyone that is a fan of late-60s garage. Finally, Corsica Garden is being put out by Evil Hoodoo Records, along with a slew of other cool releases.

To be had here:
Os Noctàmbulos - Corsica Garden
Posted by Antarktikos at 2:02 PM