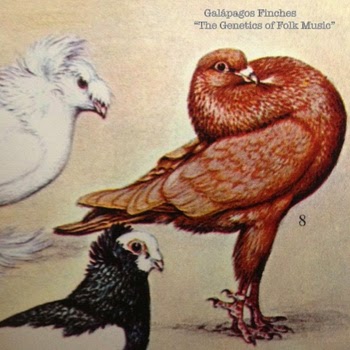 At the behest of Modern Folk I've taken another look at the independent label, Sioux Trails. They put out the remarkable album by the Glass Men that Elvis wrote up back in the spring. This time I've chosen to listen to the folk musician that releases under the name Galápagos Finches.

Although Galápagos Finches is an acoustic folk project on the face of it, the themes of the songs are reversed from what one might expect. They're not homesick and longing for return as often as mourning never having a chance to have yet explored. He sings of personal independence, emigrating from the USA and a restless melancholy that's resigned to lonesomeness and heartbreak. I know this seems like a major bummer, and truthfully the songs aren't cheerful but they are beautifully accurate and expressive of the self-doubt felt by the doleful, among which I'd include myself. It's a gloomy reflection on the limitations of one's own life and not getting stressed out and worried about it all, rather a consoling knowledge of seeing things as they are for both oneself and many others. In this state of mind daydreaming takes on a paramount significance in its ability to reintroduce glimmers of hope and whiffs of happy musings. All of this emotional cycling is wonderfully covered in these songs, and done with more classy and skill than my words are portraying. I believe should you listen to this album, and see what he's singing about and what the music is evoking, it'll leave you better off than it found you, even if there are bleak moments in-between.

To be had here:
Galápagos Finches - The Genetics of Folk Music
Posted by Antarktikos at 8:33 AM