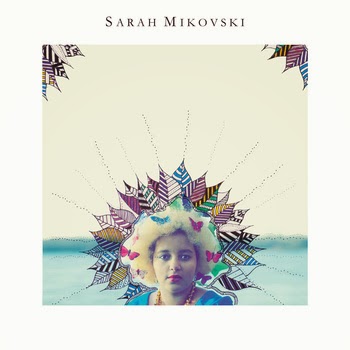 This is admitted outside the the usual fare on this blog, but not something I think many of the readership will dislike. At least that's my hope in posting it up. I came across this album while putting together the Scenes of a City post of Lyon, France yet it didn't seem to gel with the other music on that post, in fact as I suggested, with most of the lo-fi rock and adjacent genres I normally cover. Nevertheless, it is an album I could not ignore and found myself desiring to hear it has it popped back into my mind even days after writing the Lyon post.

I've got a soft spot of French singing. Partly because my French is so awful I can't understand more than a few words in any given song, and partly for the same reason French is held as a romantic and poetic language in general, at least by those not raised speaking and reading it. It isn't the only language for which I harbor mawkish feelings, but it is the only I have the longest relationship with and the only one I half-assedly tried to learn. There are many adolescent memories listening to Serge Gainsbourg and Françoise Hardy, loving the chason pop and the sweetness of yé-yé girls. My wish isn't to conflate Sarah Mikovski with those musicians, but like most truly popular the sounds of have permeated our minds and becomes a point of departure for new music, even if we only impose it there as a listener. Of course, her songs are pop music meant to be sung in French and therefore shares that very board lineage of chason and she does it fabulously.

This self-titled release is only an EP if judged by length, only being about 20 minutes. However, that is if you only hear it once through, which I can't imagine how one would manage that. I didn't even make it past the first song "Au bord de la Seine" without having to put down my book and restart the track. And it isn't the only song get me to do that, I was already repeating reactions with the second tune. Her soulful and swift singing, the eletro-pop beats that recall Stereo Total,  is fascinating to hear, and while it has many trapping of popular music and little of it will be surprising as elements, yet it never that way with pop. The whole song, the meshing of the various influences and borrowed affectations into a fresh auditory experience is all that matters. Sarah Mikovski has masterfully produced this effect and it is addictively good.