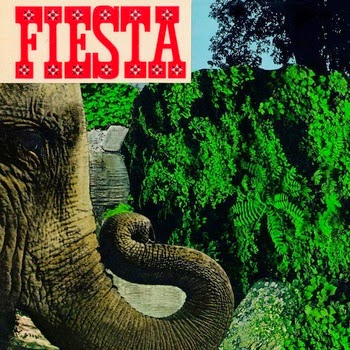 The Go are a Detroit band, and I could have saved my odd combination of ranting and praising of the Motor City for this post just as easily as throwing it in with the write-up for Blaire Alise & The Bombshells. However, I am not a terrible patient man and I had it written then so I posted it then. Moreover, there is some history to cover with the Go, both for them as a band and me as a listener. I've been listening to the Go since I was a high schooler, as I recall searching for their self-titled album in 2003 when I was a mere sophomore and just getting introduced many of the garage rock bands I still love via the Port Huron public library. So well, my memory is anything but a steel trap, I believe I was listening to their debut album Whatcha Doin' that came out in 1999. This is back when I still found the musical doings of Jack White to be worthwhile to hunt down, and there was a period that he served as the drummer for the Go. I've since grown out of any infatuation with Jack White, but I have still got a great endearment toward the Go.

Now, I haven't listed my chronology with the early albums of the Go to brag, but to say that I know the early stuff much better than their later albums and to point out that these guys have been at it for a pretty good stretch of time. The two core members of the group are John Krautner and Bobby Harlow, who have each been in the band for the entirety of its existence and share song-writing duties. There's been a huge evolution in the sound of the Go over these years since a dimwitted young man from the Thumb of Michigan found out about them, this is to say from very roughly recorded garage rock to a finely tuned psychedelic pop band. With this most recent batch of songs the Go are sounding ever more like the Kinks and the Zombies. This is a very welcome happening, as who in their right mind doesn't enjoy that 60s style psychedelic pop music? And to have seasoned songwriters, who've gotten over their youthful necessity to be super loud and settled into a more delicate genre is a fine trajectory. Moreover, they're not just trying it on for a few songs, the whole twenty track album are songs of this sort. FIESTA has reaffirmed by fandom of the Go and given me new reasons to hear what they might put out in the future.

To be had here:
The Go - FIESTA
Posted by Antarktikos at 8:18 AM