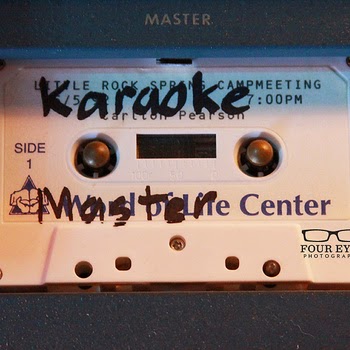 A reoccurring theme in the music I gravitate toward, at least one of them, is a fascination with the bizarre and strange lo-fi folk that seems like a weird friend of yours could have made in their bedroom. Some of these are weird and lovable friends of mine from Michigan like Forest Porridge and Twin Man (really the same dude, but there are others who're shyer) and sometimes it is submitted music like this EP. Either way I eat this shit right up as I find it incredibly charming to hear. To be far to everyone involved in this release, it's quality is pretty high and I imagine only sounds oddly lo-fi by choice. But the awkward, off-color attitude of these songs is very evident. You'll know what I mean if you hear their song "Hater's Parade."

Joshua October and The Wool is from Shreveport, Louisiana. "Is" as I'm unsure if this is one-man band despite the name or really has multiple players. This is a place I gotta imagine doesn't have all that much going for it, which I say in a heartfelt and sympathetic way as a Detroiter. However, it is in these towns that haven't got too much going on that dudes can sit around with a beer and maybe something smokable and come up with the most simplistic, unsettling and honest music you'll be able to hear. Yet the honesty is uncomfortable and not on a topic that galvanizes support so readily, hence the magic of anti-folk. Making something unpleasant and unusual into a subject of satire and musical exhibitionism. This motherfucker excel at exactly that.

However, not all of the songs are anti-folk per se, the first track is a very touching and sweet instrumental cover of "Over the Rainbow." It seriously made me very nostalgic and wistful. It all got more bizarre from there.

To be had here:
Joshua October and The Wool -  "karaoke"
Posted by Antarktikos at 7:07 PM