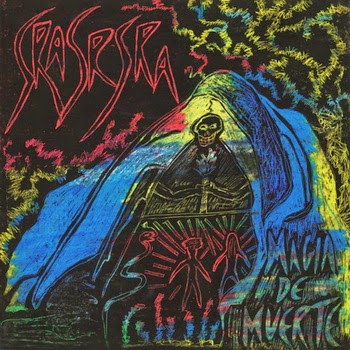 More Spanish rock and roll. The country has been pre-occupying my mind lately, partially because of the great submitted material coming in from there and partially because of my infatuation with Spanish literature, especially the work of Miguel de Unamuno. Yet this album isn't a book by a dead Spaniard nor a submission, just something I found when kicking around on bandcamp. Sounded real legit, so here I am sharing it with everyone.

Srasrsra are from A Coruña, Galicia. They make short, fast punk rock. That intensely sloppy and fun shit. I have to imagine they make a fucking racket when they practice or play a live gig and that energy is captured rather well on Magia de Muerte. Naturally, the songs are sung in Spanish so I haven't a clue what the fuck they're going off about, yet I have a feeling it would not be terribly easy to figure out should I have understood the language. Mind you this isn't the harsh, hardcore sort of punk rock, at least not overwhelming so. Rather there's a more overriding feeling of entertaining irreverence to the songs, which have very catchy guitar riffs and the sort of drumming you can see a bunch of young Spaniards bopping around to at a concert. Magia de Muerte was put out by the rather awesome looking label, Discos Humeantes, which I believe is based in Oviedo, the capital of Asturias in northern Spain. On there site you can find a biography of the band that once run through google translator is confusing worded but begins with "Srasrsra (Mrs. lady lord) are two turkeys Coruna moved pretty touching." I am sure whatever it actually says in Spanish it isn't as neat as that.

To be had here:
Srasrsra - Magia de Muerte

This post was corrected after someone pointed out where the band really was from, as I had made a wrong assumption. So thanks to that dude.
Posted by Antarktikos at 1:10 PM