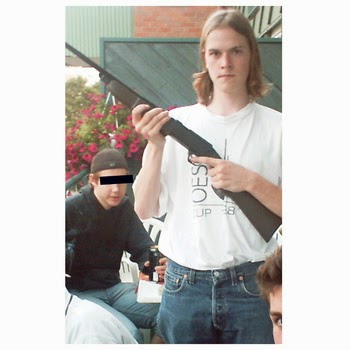 An awaited follow-up to the debut album of Sweden's Jackie. Two years ago they released an album called Greatest Love Songs that I wrote up and have nothing but the fondest of memories for so I was admittedly quite jazzed to see that they've got new songs out now. The new releaese, Joy is a relatively calm album of fuzzy dream pop with a psychedelic mood. It has echoy vocals that are subtle behind the looping guitar and the general light noisiness and distortion. That lovely blend of light melody and cacophonous that when balanced well allows the mind to wander around in a song like an odd daydream. To my ears Jackie seems to bear resemblance to Olivia Tremor Control or other Elephant 6 groups in the first half of the album, which I  mean very complimentarily. However, my ears burn for E6 all the time, so make your own judgment on whether I need to update my references. As it goes the uniqueness of Jackie again began to sink in, and just like Great Love Songs, giving this album multiple plays cannot to anything but enhance the experience. What I am saying is Joy is a great album to relax to and do whatever thing tickles your fancy. Hell, I'm playing it at the front counter of the bookstore right now while I pretend to have work to do on this computer. I'd go on but can't let the coworkers get wise.