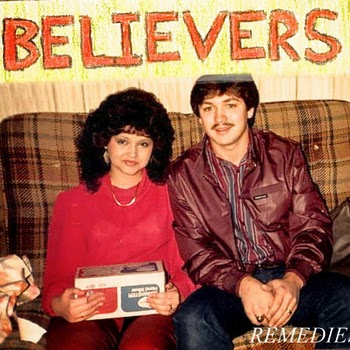 Again I'm writing up something that has been on the blog before, but wasn't written up by me. Like Yorkshire Fields this band was covered by Elvis months ago when they had put out an EP. Since last year's Inanimate EP they've been busy making a full-length release and what we've got here is just that, Believers.

To refresh those that mightn't have heard the EP, Remedies is a electronic bedroom pop act out of Birmingham, Alabama. I had some conflicted feeling about Believers, as it is rather far outside of my usual realm of listening, but in the end I think I came away with a very positive opinion of the album. First thing I was reminded of was Spoonty, the Australian beats musician from the last Grab Bag, and how I was pleased there were vocals in the songs. While guess what, Remedies not only as vocals, they take a prominent role to a degree I almost felt myself not understanding why I didn't problem with it. Let me put it this way, for a man that doesn't fucking tune it to anything to hear the lyrics and clear vocals isn't a necessity in any way, shape or form, I did not find myself wishing away what these Alabamians were saying. Sure, the singing is affected and it seemed to me a little like what I hear if I am ever stuck having to endure whatever it is that people who go to malls or watch a lot of bad TV like. You know with the autotune and whatnot. Yet here's the thing, if that shit was half as well done as Remedies then I might not have to live in what might be one of the largest cities in America with a mall within its borders (Detroit is a weird place, guys, as you can imagine). I'm not saying the made it palatable to me, I am saying the made it downright enjoyable to experience this sort of music.

When I was a bright-eyed and cheerful teenager (in reality an angry and dumb asshole) I did hold a theory that any genre done well would be something I was into. Of course I don't believe that bullshit now, as nothing is gonna save ska from sucking major balls. Notwithstanding that, the theory does seem to be proving itself largely justifiable from my experience getting all sorts of genres on here that I would have never sought out otherwise such as sludgy metal, goth and experimental hip hop. I'd even say some genres like lo-fi electronic called chillwave or glo-fi is completely thanks to Spacerockmountain. While my favorite genres haven't shifted very far, I think it makes all the music I hear better and I appreciate the artistry all these various musicians are bringing forth and sharing for free with all of us when I get somebody like Remedies to show me the range of sounds I enjoy listening to is wider than I previously knew. Eight years of this shit and still getting schooled, thanks dudes.

To be had here:
Remedies - Believers
Posted by Antarktikos at 1:44 AM