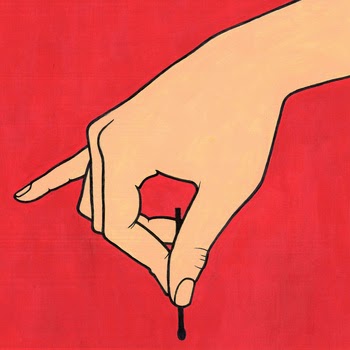 A little while back I was contacted by someone from Sonido Muchacho Records in Spain with this album. Because I am disorganized fool I thought, "I'll remember this, seems pretty legit" and then forgot it for weeks. After have an inkling that I was forgetting something for a few days I recalled I probably lost track of a slew of albums that were submitted. I should just work on the assumption I always forgot something I meant to do, but I guess that is a good way to work oneself into an early grave. Anyhow, here is a slightly belated review of Juventud Juché.

As Quemadero is sung entirely in Spanish I haven't a clue what they're saying, not completely sure I would know even if I was fluent as they're shouting lyrics on a lo-fi recording. As you might suspect, I don't mind not knowing the words to the songs, it isn't what I listen for in nearly anything. What is the most obviously great part of this album is the post-punk thumping bass line and angular guitar like good Gang of Four tune. In fact many features of this album remind me of the Gang of Four, which I find to be a rather tremendous thing. Not as harmonic of singing, more of a punk rock exasperated vibe going on, but the instrumentation is pretty damn dead on with the guitars shimmering into a wall of sound and the drums pounding rapidly in a faux-military march like many good songs from Entertainment!

To channel the little Craig that sit on my shoulder like a devil that has bad taste in beer (gotta listen to the podcast to get this), it does sound an awful lot like something most of already know. However, what we know isn't in Spanish doesn't feel quite this fast and loose about it. Lately I've been putting much thought towards the role of bravado in garage rock, and I think the same principle can hold true for other lo-fi rock styles like post-punk. There's a balance that can be struck between uniqueness and reworking of older themes if enough bravado in present. To use beer as a metaphor, it is like drinking an IPA, because they're bold and bitter and rather hard to fuck up. Sure a brewer can make something wild and unique, but it could suck hard. Even the IPAs aren't all the same, and those with the better hops and balance are sought out, sort of like a good post-punk revival act should be. Juventud Juché is one nice IPA.