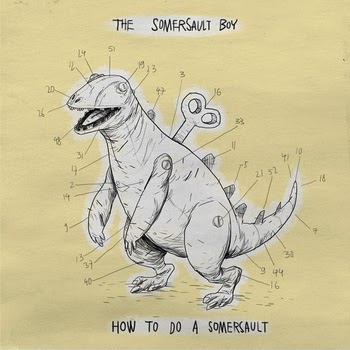 Hungarian 'sickpop' band the Somersault Boy put out this album just a couple of months back and I've been playing on and off ever since. Now, they bill themselves as sickpop, but that's not a term I'm familiar with, but what they sound like to be is high energy, low fidelity power pop. The songs are short, intense numbers with singing that is vaguely akin the pop punk of the 90s, in the best possible way. In tone and tempo they remind me Salt Lake City's Albino Father (whose latest album I can't believe I failed to write up but I should be able to fix that). Now, how this Budapest band sounds so dead on like they could be band from the middle of North America I'll never quite be able to wrap my head around. Guess I don't need to if I just wanna enjoy hearing it, which I most certainly shall keep on doing. Oh, and the album are is fucking great, right? Look at that wind up dino!

To be had here:
The Somersault Boy - How To Do A Somersault
Posted by Antarktikos at 8:39 AM