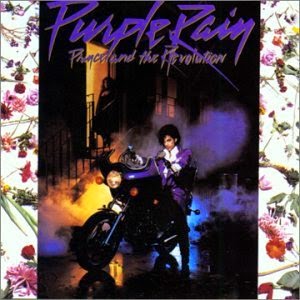 It is hard to believe that Prince's smash record is now 30 years old. While I was a young lad when it was released, I can still recall the songs being played from local R&B radio stations and passing cars well into my teenage years in the 90s. When I was younger and stupid, this was the kind of music I wanted to rebel against and destroy. How could anything that sold 13 million copies be worthwhile and important? Prince is not exactly the visage of rebellion I held in my mind growing up in a small, desert, California town. He was the establishment as far as I could tell. Little did I know, Prince was making records that sounded like no one else, and even with the countless copy-cats, his tunes still sound fresh and remarkable. He carved out a portion of the corporate music structure for himself, and has ruled over it for over 3 decades, making records that were often bizarre and un-commercial in the process. Maybe he just made so much money from this record that he didn't have anyone to tell him no. Or perhaps his own ego went to his head and he decided he could make three disc concept records about black nationalism and his Jehovah Witness faith. Fuck if I know. What I can say is that at this point, countless "dance punks" and experimental indie artists have borrowed from him, whether they know it or not.

Prince was already a critic's darling prior to this release, but outside of his home of Minneapolis, he was just an eccentric pop artist that made some interesting records for a select group. This record made him a superstar. We have all heard "When Doves Cry" and the title track,  but re-listening to said songs with your now-discerning ear, you may notice that the lush soundscapes crafted on those tracks put it in a different category than other pop hits of the day.  For the love, there is no bass line on "When Doves Cry," something unheard of for a dance track! The screams and wails "The Beautiful Ones" would be jarring to the even the most ardent rock follower. You can see that Prince and the members of the Revolution were not simply trying to make a track that could get a little radio play; they were playing with the format in a way that abandoned its conventions and charted its own paths. Far more Brian Wilson than Michael Jackson in this record, and that is a good thing.

Prince is one of my favorite artists, and while his back catalog is daunting (and sometimes terrible), why not get reacquainted with him and his most popular work while we celebrate its 30th birthday?