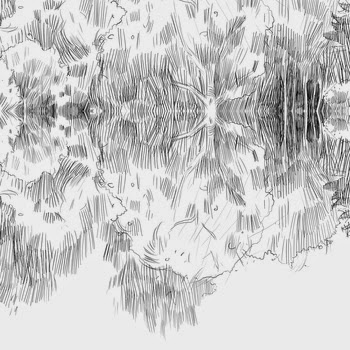 I get grumpy about writing up music at times. At these times I'll become detached from this blog, or at best write some reviews that are less reviews than me musing about myself. Check out the Leggy and Menschliche Energie posts to see that for yourself. And I liked those albums, liked them very much, mind you. Just didn't get my fucking kicks, looking like I can write or whatever by just describing the music. Well, this time I don't think I have enough words to tell you what the music is about. Magnus Dewi is the moniker used by a Frenchman play a music style that is of a decidedly American origin. So here is my attempt to explain that statement and turn a few people onto a genre of music I hold especially dear and this new French practitioner of it.

Earth Plates is tagged "american primitive" on the bandcamp page, which immediately caught my eye as this is the name given the style of playing done by a personal favorite musician of mine and something of a cultural hero in my life, John Fahey. This man was many things, but perhaps most centrally to this story is that he was a musician that came into adulthood in the period of the 1960s where in folk and blues revivals were gaining tremendous popularity in the United States. Fahey possessed a vast knowledge of American music of all sorts as a record collector, musicologist and songwriter and he didn't want to pigeonhole his music as "folk" like many of his contemporaries. He incorporated much more than the American folk tradition, pulling from the blues, gospel, bluegrass in the era that provided us with our modern conception of psychedelia to make a raw, essential American music. This has been called American Primitivism and has a listen of adherents to the form, but I still find Fahey's the supreme example. It isn't simple by any means, most of the best songs are long numbers that have a droning element in how this use repetition and variation to a degree that parallels the best of avant-garde psychedelic music.

For this to have traveled to Europe and been taken up by a skilled French musician is perhaps one of the more amazing and delightful features of this over globalizing world the internet is pushing us toward. Magnus Dewi has a stripped down, pure sort of interoperation of the style on this album. So skillfully are the songs played if given the album without context I could have mistook for an established player in the American Primitive pantheon like James Blackshaw or Leo Kottke. Earth Plates is an absolute delight to hear and I have already been lost of hours in repeated listening of this magnificence effort.

In case any of you wondered how I found this, it was a submitted album just like the dozens of others that come in every month. Good on Magnus Dewi for finding me, as I don't know if he heard me go off about John Fahey for several minutes on one of the earlier episodes of the podcast and how I find so much in his personal story, connection to entho-musicology and the sublimeness of his playing to be inspired by. Anything that invokes that strong attachment is wonderful, but to have a musician that can live up to that remarkably high standard is the truly exceptional aspect of this experience for me. So don't hesitate any longer and give a listen to Earth Plates by Magnus Dewi, put out by the Vilaine Mouche label.

To be had here:
Magnus Dewi - Earth Plates
Posted by Antarktikos at 9:13 AM