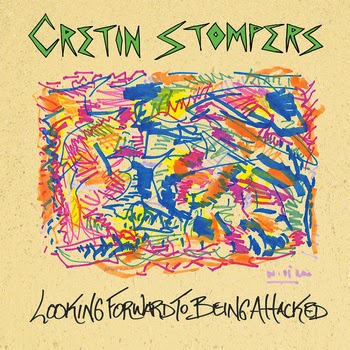 What we've got here are an assembled forces of some garage rock notables. Cretin Stompers is a band formed by members of some of my favorite garage outfits of recent years including the Barbaras, Jay Retard, Magic Kids, Wavves, and The Delay. Those are some remarkable bands and for them to all be be connected does place some high hopes of the debut album, Looking Forward To Being Attacked. I do feel that they lived up to the expectations and have found the release to be most righteous in its fuzzy, high energy rocking. They get creative with the singing and play around with the song structures a bit, with some it getting strange and trippy, yet many of the songs unrecognizably lo-fi garage. It all begs for repeated listens as it seems like several albums bled into one another in a beautifully chaotic way. The vinyl is available from Hozac Records and I gotta imagine there a possibility of a tape version either rolling around in the works.

To be had here:
Cretin Stompers - Looking Forward To Being Attacked
Posted by Antarktikos at 9:09 PM