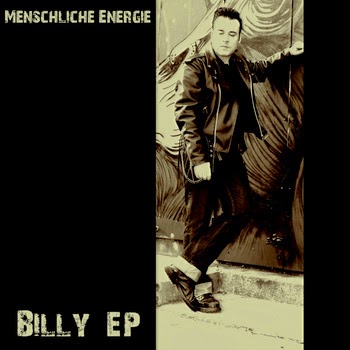 While I normally throw a group of EPs together into a longer post, for whatever reason I want to say a bit more about Menschliche Energie. Perhaps it'll be clearer to both you and I by the time I finish this write-up. Now I'd never heard of Menschliche Energie before I discovered Billy EP after rolling around on bandcamp pages for a few hours. That's not terribly unusual for any of us at Spacerockmountain to do, but I've always felt a strange need to assume the role of a champion for the music I find in this method. Sure I talk up and will recommend the shit out of submitted material, even follow the band myself and make sure I am not missing out on new releases, but I always envision myself as a loud fanboy in this scenario. I am cool with all this, in fact I enjoy the fantasy, or slight reality, that I'm your buddy giving you a heads up on some cool tunes. It changes, however so subtly, when I pull out of the infinite depths of the internet a particular EP, whether or not these fellas are actively seeking promotion or not, and tell you, "This is some real tight shit."


It is that infiniteness that is the issue. It isn't just infinite to me, but to everyone using the internet, and I am just making more infinity every time I feel the need to write something up and publish it here. Truth is I want you guys to be like "yeah, that's cool" but most of the time I am just staring at a void full of endless more music to hear, books to read and movies to watch that can make one feel uncultured despite a lifetime of consuming memes and media.

Yet in a desperate hope that this does fall down some endless void, I'm telling you that I thoroughly enjoyed listening to Menschliche Energie's Billy EP. It is unsurprising at how well-crafted their songs are once I knocked around their bandcamp page. They've got releases from as far back as 2003. These guys are veterans at what they do. And what they do is snyth-heavy post-punk rock. It's absurdly able to blend a James Dean, leather jacket rocker style with the ultra-Mod and flamboyant 80s music that succeeded that notion. The songs are brief and don't jerk themselves off in anyway for having been a longstanding band from Nürtingen, Germany, but rather show a seasoned musicianship that knows excellently how to cut off the excess fat, leaving just enough to make it tasteful but not chewy.

To be had here (NYP):
Menschliche Energie - Billy EP
Posted by Antarktikos at 1:00 PM