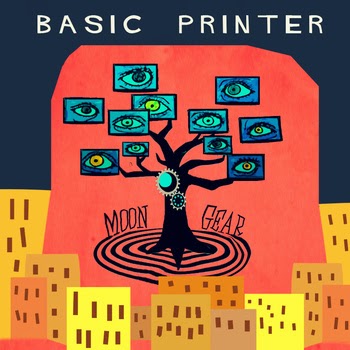 Here we have a submission from Jesse Gillenwalters of Binghamton, NY, who makes creative electronic pop songs under the moniker of Basic Printer. "Moon Gear" is one of an impressive 9 releases, and is a concept record where the music serves as soundtrack to a fictional game about the planet of Platonia. It's easy to imagine, at least if the game is a video game, as this is synth-heavy music lending immediately lush, warm and colorful tones to these 10 songs.

While "Moon Gear" is a very accessible listen, it's not a straight-up pop record by most stretches of the imagination. There are stringed instruments throughout steering this toward the realm of chamber pop but the warped synth tones, of which there are many, keep that tag at a long arm's length. The record overall also stretches into the progressive and weird, especially on "Flora Aetus" and my favorite track "Knockout Mouse". But Gillenwalters' voice maintains a pop timbre when not heavily effected, giving some songs a Max Tundra meets Har Mar Superstar sort of vibe.

This is the second record I've heard out of Binghamton, NY that I've really dug (the first being Underground River). I'll have to put Binghamton on the short list for a possible Scenes Of A City post (check out previous posts for Guayaquil, Ecuador and Vilnius, Lithuania).