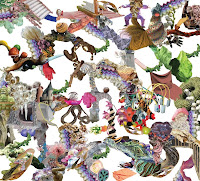 Kemialliset Ystävät are the bee's knees. Really I should've been more on top of getting this up sooner to its release, but my shit is done scattered all the time if you haven't noticed. Regardless, I doubt enough of the people that read this thing have followed my advice and grabbed up enough Finnish pscyh/folk/drone music. Seriously, these Finns know the score and Kemialliset Ystävät is the top of the stack, along with Paavoharju naturally. Ullakkopalo is more of the band's amazingly eerie songs that employ electronics and acoustics in equal vigor to create an otherworldly soundscape. While this sounds like a good deal of ambient and post-rock, I do have to same the favor of this and like acts is so much more the sum of the parts. Perhaps what sets Ullakkopalo apart is that it has some degree of video game-ness to the sound. Almost like they took sounds from an unreleased dungeon crawler and twisted it nearly beyond recognition and then plopped nature on it. Some of the very best in avant-garde.
To be had here:
Kemialliset Ystävät - Ullakkopalo [256 VBR kbps]
Posted by Antarktikos at 11:49 AM