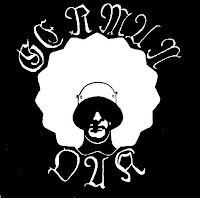 German Oak is an album with an odd tale behind it. German Oak was an instrumental krautrock band that went to an air raid shelter in Düsseldorf to record. The band went over like a lead balloon at the time and nearly all of the LPs produced remained unsold and went into a band member's basement for over a decade. Therefore, unlike their contemporaries, such as Faust and Can, they didn't enjoy any success of the initial enthusiasm for krautrock. Despite this lack of support early on the band was discovered and embraced in later decades as genuine krautrock from the period was sought out by fans and collectors. German Oak didn't have lyrics obviously, but I can't help but wonder if the song titles had some part in people not gravitating toward it in the beginning, as the seem to mostly reference Nazi Germany and the Second World War. How offensive it can be in a song without words I question though, but in any case the band didn't rise out of the ashes as a novelty. They are legitimately quite good at making music and really made a fabulously cohesive album. Feels like a precursor to acts like Eternal Tapestry and Voice Of The Seven Thunders as well as a neat to compare to other krautrock bands.

Also I didn't mean to, but I did seem to do this a year after Edo at Know Your Conjurer did. Getting harder to find something he hasn't from the 70s or 60s though, he is good.
To be had here:
German Oak - German Oak [192 kbps]
Posted by Antarktikos at 11:30 AM