Despite what looks like the name of a band from Portugal, Os Mundi is a German band from Berlin. Found them after I got the German Oak album, but found they weren't very similar. They released two strange, in fact differently strange, albums in the 1970s. Both can be called generally progressive rock but carry in them disparate conceits. Latin Mass is a conversion of a Latin mass from church into a dreamy, meandering sonic adventure. Therefore the lyrics are really just the words of the mass sung over the wild progrock they deftly produced. Rarely, but not unique, as I did read that this was done previous to their go at it. Pretty wild nonetheless. Their second full-length, 43 Minuten, is not a concept album. Instead it is more run-of-the-mill progressive rock album, but I suppose that is a relative term in the world of progrock. 43 Minuten infuses folk and jazz, the latter mostly in horn flourishes scattered all about. In case the linguistic references has you wondering, it is sung in English, but several tracks are instrumental.
To be had here: 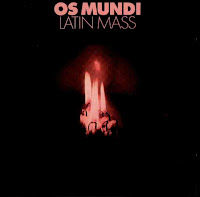