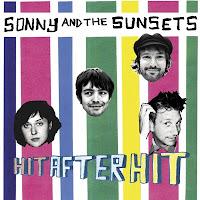 Although slow on the news about their charming first album, Tomorrow Is Alright, I kept my eye out for the follow up so I'm only a couple months antedated by the release of Hit After Hit. I'm surprised that Sonny and the Sunsets aren't even bigger in the realm of pop music, as their delightful brand of indie pop is as inoffensive as I can imagine. Like the Beach Boys, who surely are a significant influence on the band, they manage to experiment a little without being any less agreeable. In common with the first album, Hit After Hit is heavily reliant on the quirky songwriting that twists the point of view of the singer if you pay attention to the lyrics. Not that ambitious, it feels like a low-key affair, yet the laid back atmosphere the source of the majority of this album's enjoyable moments.
To be had here:
Sonny and the Sunsets - Hit After Hit [320 kbps]
Posted by Antarktikos at 7:24 AM