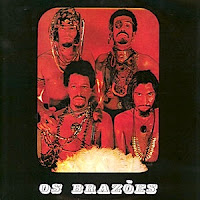 Tropicália is a genre that has been begging me to explore it further for years. For whatever reason I've mostly stuck to the amazing Os Mutantes and Caetano Veloso, but there is of course much more to be had. Os Brazoes is one of the rank of tropicália bands that emerged in the late 60s in Brazil, which in a simplistic sense is a mixture of North American psychedelic rock with native Brazilian styles. Their career would have been notable if only has the popular Brazilian singer Gal Costa's backing band, but they also produced this self-titled album. Os Brazoes do sound like Os Munantes, especially their early albums, but don't seem as eccentric and sensational, more smooth for the most part. In addition, it is worth noting that there are covers of each Gilberto Gil and Jorge Ben to be found on this album. Hope you like this one because it has inspired me to listen to more artists in the genre from that era and some will more than likely end up on here as well.
Also, in a happy coincidence Edo over at Know Your Conjurer posted Gal Costa's 1969 album Gal today, so you can her the woman that gave Os Brazoes work as her backing group.