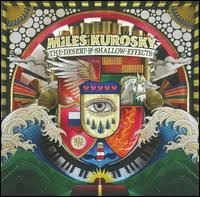 Over the holidays I visited my small hometown and whenever I do this I find myself re-listening to music that I enjoy in high school. A whole bunch of it isn't anything I am into these days, but Beulah remains one of my fondest bands. Imagine my joy upon seeing that the lead singer and main songwriter of Beulah, Miles Kurosky, has reemerged in the music industry with a solo album. While Beulah called it quits back in 2003 in the midst of considerable strife for the band members, and I recall rumors that Kurosky might have a new project in mind. Yet after seven years I had forgot and all but given up on the idea of hearing more from this songwriter that I was so keen on in my adolescence. The Desert of Shallow Effects has the automatic similarities to Beulah because of Kurosky singing his witty lyrics that often warp romantic cliches. While I'm comparing this album to Beulah I want to specify that it sounds more like earlier albums by the band, When Your Heartstrings Break mostly. What is different is a more complex instrumentation at points, and I know that is hard to believe as Beulah was a six-piece group but he pulled it off. As well, singing in harmony is to be found all over the place. I am really glad to see that this album is finally out and I am really enjoying it even if it isn't the best songwriting that Kurosky has ever done.
To be had here:
Miles Kurosky - The Desert of Shallow Effects [256 VBR kbps]
Posted by Antarktikos at 10:02 AM