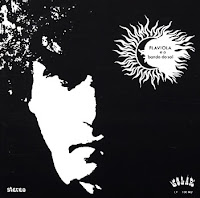 Hope you liked that last two day's posts, because this is yet another Tropicália album. This is a release that is often cited as a Brazilian gem that is too often overlooked. Flaviola e o Bando do Sol are a few years later than the previous albums posted here, but it is absolutely in the same vein. However it does have a considerably different mood, at least as far as can be figured without knowing the lyrics. It isn't exactly the full sounding Tropicália that Caetano Veloso was attempting to make, it is far more dreamlike and psychedelic, or psicodelia in Portuguese. Less instrumentation perhaps but stranger, with one review I read stating it includes "cellophane crinkled into the microphone as percussion." The wandering guitar playing reminds me much of Bröselmaschine, a German kraut-folk outfit that I posted months ago. The latter part of Flaviola e o Bando do Sol does pick up in pace and is a bit more like Veleso and the others I've posted. The most fundamental thing it instills in me is a calm happiness, and that is always something to be sought after.
To be had here:
Flaviola e o Bando do Sol - Flaviola e o Bando do Sol [256 kbps]