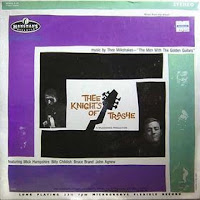 The Milkshakes, alternatively called Thee Milkshakes, were a garage rock band from England. The band was formed in 1977 with Mickey Hampshire and Banana Bertie when Billy Childish's previous band called The Pop Rivets disbanded. The group played some real righteous garage rock that was simple, catchy and well-structured. They even infuse surf rock into some of their playing as evidenced in the track called "The Ding-Dongs" along with their instrumental numbers. It is interesting to compare the British version of garage from the 80s to the American scene, like Detroit's Gories. The Gories were loud, abrasive and spontaneous but the Milkshakes seem more polished and practiced. Nonetheless they sound good as all fuck. Thee Knights of Trashe is the last album the band produced as afterward they broke out when Mickey left the band. Thereafter Childish went on to be in many influential and awesome garage bands like Thee Mighty Caesars and Thee Heatcoatees. I've listened to Childish's various bands on and off over the years, but I have always really enjoyed this album.
To be had here:
Thee Milkshakes - Thee Kinghts of Trashe [192 kbps]
Posted by Antarktikos at 9:54 AM