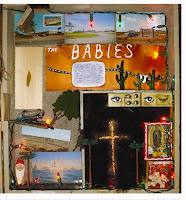 Those Vivian Girls are rather prolific musicians. Not only has Frankie Rose gone off and done her thing but her bandmate Cassie Ramone decided to team up with Kevin Morby from Woods. The group also features Nathanael Stark of Bent Outta Shape and Justin Sullivan of Ringers and Bossy. As might be easily assumed the Babies have a lo-fi garage quality, but they also quite poppy and sunny to the point of seeming like surf pop at times. On last.fm some individuals have tagged "beachgaze," which is simply adorable. That aside, the band is without a doubt extremely catchy I've already listened to this several times over. Don't think this is supposed to be out into Feburary, but Spacerockmountain standard time is in the future and past all at once.
Note: Sorry about my messing up the original .zip file. It did not include the fourth track of the album, but all the new uploads that I post here indeed contain it. Sorry if that is annoying, but it is a leak so shit happens. I put it on several sites so it might be up longer, as mediafire fancies taking it down nearly as quickly as I can put it up.

Posted by Antarktikos at 9:33 AM