Girls of the Gravitron - Magnetic Mountain (2010) 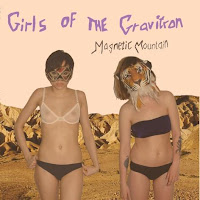 Magnetic Mountain is a good name for an album, but as the poster on Spacerockmountain I might be biased. Girls of the Gravitron are a Memphis, Tennessee band that has featured musicians from various other former and current bands from the city such as the Barbaras, Magic Kids, Kazalok, and Boston Chinks. Unfortunately, other than the Barbaras I haven't heard any of those bands, although I have been meaning to check out the Magic Kids, the pitchfork darlings that they are. While this could certainly be called garage rock, it is far less guitar driven and wild than most. It is like would could be a charming indie pop or rock group decided purposefully to turn the quality of recording down and build their sound to take advantage that. Highly functional for pleasurable listening.
To be had here:
Girls of the Gravitron - Magnetic Mountain [256 VBR kbps]
Posted by Antarktikos at 10:05 AM