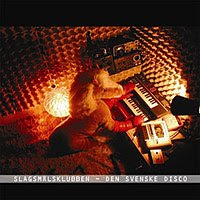 College courses recently began for me, and oddly enough I've been posting with much more regularity. I do believe this is because of the added amount of management of my time I have to do, and blogging makes great procrastination. For example, I'm posting on my only day off in 8 days instead of reading about China and working on speeches. You lucky dogs.
Some of the happiest damned music on Earth. Slagsmålsklubben, of most obvious Swedish origins, make some ecstatic electronic pop. The name is less astounding when you learn it is just the book title Fight Club translated to Swedish. I enjoy them regardless of the cinematic roots of their name. Whilst not truly being 8-bit or chiptune, they're strikingly close. In fact, I've heard them called gamewave, which I think is something like what I just said, near 8-bit but not really. I think on the actual release case there were the track titles in both English and the native Swedish, but my tags have only the Swedish. If you want to see the English they're on wikipedia. Otherwise, stop fighting your urges and get this stuff to cheer up your hungover Saturday mornings, for we all know if everything goes right Sunday will be worse.

To be had here:
Slagsmålsklubben - Den Svenske Disco [224 VBR kbps]
Posted by Antarktikos at 11:00 AM