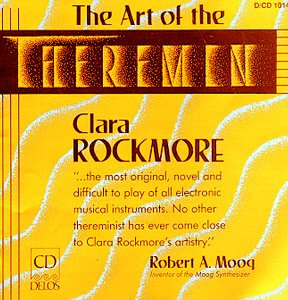 This is a damned strange album. It fits in this precarious nook betwixt classical and avant-garde. Clara Rockmore was born way back in 1911 in Lithuania, and was a violinist of talent from a young age. However, with the advent of electronic instruments she began down another path that would forever immortalize her as an early great. The theremin is a machine invented in 1919 that has radio frequency oscillators with antennae, usually two as to control the volume and frequency. Rockmore would come to be proven as one the best players of this odd instrument. This is to say she succeeded in making very respectable music with something that has for the most part been utilized mostly as a curiosity or to make old skool horror effects for films. She played the works of classical composers like Stravinsky, Tchaikovsky, and Saint-Saens to the accompaniment of the piano. Under the influence of Rockmore's skilled hands the otherwise hooky theremin became an elegant instrument that is eerily like a combination of strings and human vocals. I originally listened to this as something obscure and different, but after even a single play I was convinced of the true artistic importance of both Clara Rockmore and the theremin.
To be had here:
Clara Rockmore - The Art of the Theremin [160 VBR kbps]
Posted by Antarktikos at 10:51 PM