As per request, here we've got both Lollipop Train and David Candy. First, Lollipop Train is a spot on name for the style of extremely sweet indie pop jumbled with spoken-word musings. The whole thing is very very similar to, yet predating, Death by Chocolate. As to why this is, no surprise at all. It is Death by Chocolate, just before Angie Tillett called her work by that name with those particular bandmates. Basically, consider this album zero that goes with the two Death by Chocolate albums I've already made available.
The second is a slightly stranger case of musical happenstance. David Candy is a pseudonym that seems like a real name or at least the main stage name of a performer, but in fact it is a remote and seldom spoken of secondary outlet for Ian Svenonius. Now, if this name is familiar (and if it isn't this is why it should be) it is because Svenonius was a member of amazing post-hardcore act Nation of Ulysses, followed by the more funky punk of The Make-Up, breifly Cupid Car Club and currently of Weird War. More or less the man is like a rabbit who's fucking makes music. Now why might a post-hardcore rocker of notable standing bother to make a quirky album along the lines of the before mentioned confectionery-name-plus-talking-over-psychedelic-music stuff? Because he wanted to. According to wikipedia's David Candy entry "The character of David Candy was part of a series of 'Magazine-Style Records' which included other imaginary acts such as Death by Chocolate, Maria Napoleon, and Lollipop Train." He only did the single release with
this name and it finely fits into the theme. 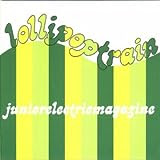