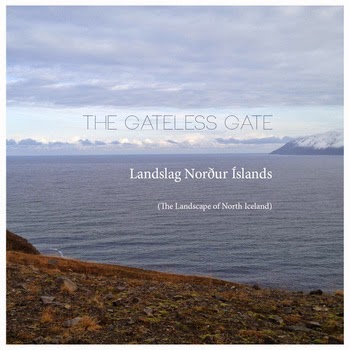 So I don't all that too far north, but north enough that winter has always been part of my life. Something that is stark, cold and strips the landscape of color. It gets colder though, there are the barren, frozen landscapes of closer to the Arctic such as that of Iceland that this album involves. As uncomfortable as the cold can be, it can be a beautiful and serene experience to inhabit such places. I have vivid memories of trips to Michigan's upper peninsula as a child and standing over a mile out the frozen surface of Lake Superior curiously staring into the white ice and blue sky that spread before me. If only I could've had an mp3 player playing the songs of the Gateless Gate then.

The Gateless Gate are actually from closer to me, just a four hour drive to the Ontario capital of Toronto. No strangers to winter, but it seems these northern climes have been made a study of by this duo. Landslag Norður Íslands is their third album with the others sharing the influence of cold northern terrain, and there are EPs of which one I've written before. In all their output they make wonderful use of ambient sounds, harmonic keys and ethereal effects to create a vast soundscape out of the few elements present, much like the landscapes referenced. The results have a remarkably psychedelic quality, as all great ambient music does, a sort of removal of space and time. It isn't bleak nor lifeless, even the sounds of little waves and fate chirping of birds heard in the compositions remind one of how existence in endlessly altering even in the coolest of places or the most ambient of songs.

To be had here:
The Gateless Gate -  Landslag Norður Íslands (The Landscape of North Iceland)
Posted by Antarktikos at 9:27 PM