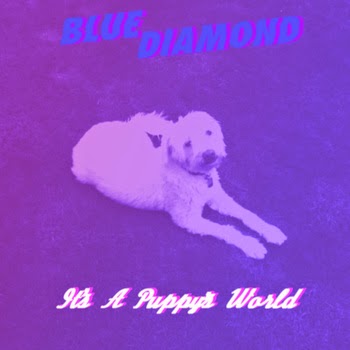 Every now and again there's this strange sort of album that comes the Spacerockmountainway. A weird bedroom project that's hard to describe and is dissimilar to most other things on the blog but are at the unified in that aspect. Blue Diamond has fallen into this category nicely. It is most definitely the work of a dude with eccentric tastes made tinkering away alone only sharing it with us all now that he's completed the strange tunes. As usual, I'm eating this shit up.

Blue Diamond is a guy from La Quinta, California and he's taken some old, warped 80s new age/new wave sounds and mixed it up with some truly bizarre vocal stylings, including some answering machine message recordings. The whole album gives a sort of vaporwave vibe, striking similarities to SODA lite in the instrumental parts. For as strangely and purposefully awkward it seems at times, there are some songs on this album that transcend it all really shine as great pop gems, such as delight tune "Boatful Of Weed Crashes Onto Nude Beach."

To be had here:
Blue Diamond - It's A Puppy's World
Posted by Antarktikos at 10:28 PM